By the end of this lesson you will have learned…

1. How does CLR fit with other energy standards?

The idea of the CarbonLite Retrofit programme is to enable retrofit that closes the three performance gaps:

Retrofitters are offered guidance on the level of space heating savings to aim for in the finished retrofit in order to help achieve this.

CLR energy targets are not an ‘energy standard’ that aims for a particular energy target (i.e. it is not like the EnerPHit standard which is designed to meet a Specific Space Heat Demand / SSHD of 25 kWh/m2.a).

Depending on the form factor of the building to be retrofitted, CLR proposes a “most ambitious energy target” which equates to other known energy standards (see table below). This is a guideline, which retrofitters can exceed or relax.

In the table below, existing UK low energy standards for new build and retrofit are listed. Below these are listed 3 common UK house types where ambitious retrofits have been modelled for CLR (with a deep internal wall insulation retrofit, and a deep external wall insulation retrofit). The “most ambitious but feasible energy reduction scenario” has been related to the other standards in the table.

As of January 2021 this earlier CLR work has informed the development of a new AECB Retrofit Standard – see later in this lesson. Also note that ‘AECB Silver’ in the table below has been rebranded to the ‘AECB Building Standard’. 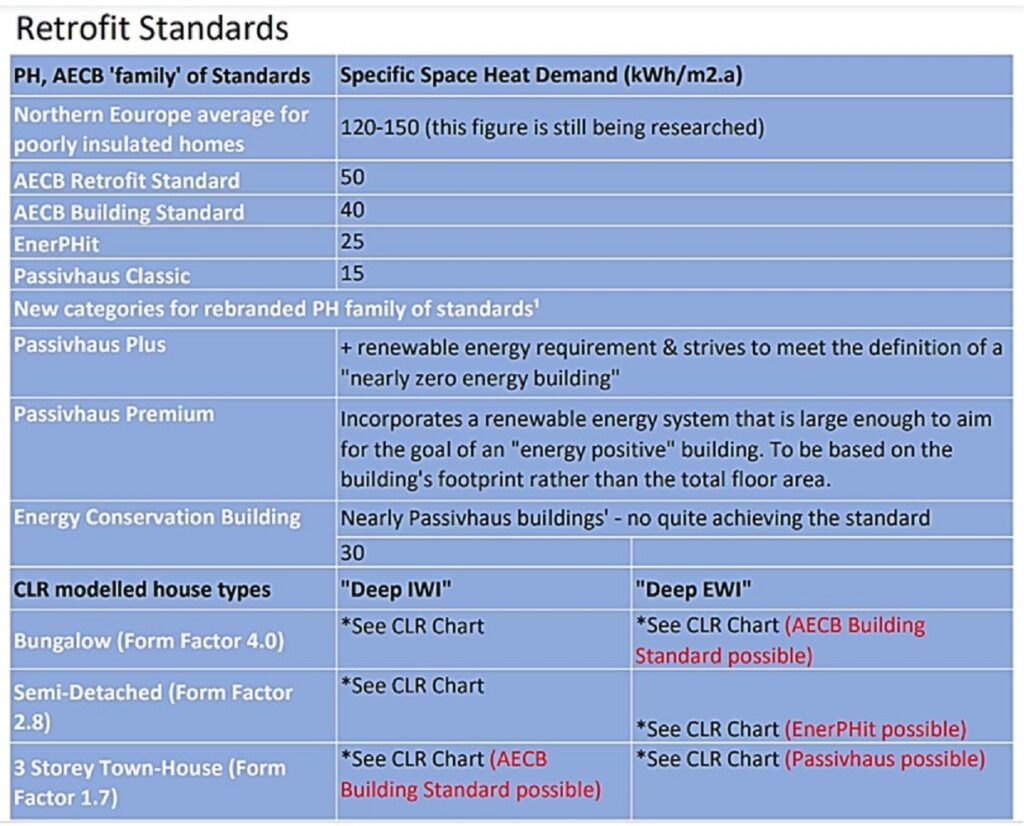 Table of CLR standards in the context of other new build and retrofit standards Note: “see CLR chart” in the table above refers to the CLR Space Heat Demand targets, updated in 2020.

Undertaking this course and using the CLR design stage and as-built stage checklists for each project gives extra assurance that attention is paid to moisture safety – an issue that is not addressed in “energy-only” standards.

2. What does a CarbonLite Retrofit usually involve?

To achieve the target levels of energy efficiency and comfort, a typical CarbonLite retrofit on a solid-walled property would usually entail:

Some retrofitters will be experimenting with new or less tried technologies: they are strongly encouraged to monitor and share feedback based on robust monitoring, observation and reporting methods.

It is assumed that any retrofit would include upgrading the efficiency of lighting and appliances to low energy versions. Much more detailed information on low energy building services for retrofit is found in Module 7. Specific guidance on maximising efficiency of potable water and hot water in buildings is also available from the AECB website – see links below.

3. Conclusions arising from the work that led to the CLR guidelines.

The AECB has analysed a large number of existing retrofits and carried out detailed modelling of the UK’s most common house types.

The research behind the CLR guidelines and suggestions arising from them:

This lesson has explained how the CarbonLite Retrofit energy guidelines relate to existing energy standards.

It also emphasises that moisture safety is at the heart of the CLR process – an issue that is not addressed in “energy-only” standards.

This website uses cookies to improve your experience while you navigate through the website. Out of these, the cookies that are categorized as necessary are stored on your browser as they are essential for the working of basic functionalities of the website. We also use third-party cookies that help us analyze and understand how you use this website. These cookies will be stored in your browser only with your consent. You also have the option to opt-out of these cookies. But opting out of some of these cookies may affect your browsing experience.
Necessary Always Enabled
Necessary cookies are absolutely essential for the website to function properly. These cookies ensure basic functionalities and security features of the website, anonymously.
Functional
Functional cookies help to perform certain functionalities like sharing the content of the website on social media platforms, collect feedbacks, and other third-party features.
Performance
Performance cookies are used to understand and analyze the key performance indexes of the website which helps in delivering a better user experience for the visitors.
Analytics
Analytical cookies are used to understand how visitors interact with the website. These cookies help provide information on metrics the number of visitors, bounce rate, traffic source, etc.
Advertisement
Advertisement cookies are used to provide visitors with relevant ads and marketing campaigns. These cookies track visitors across websites and collect information to provide customized ads.
Others
Other uncategorized cookies are those that are being analyzed and have not been classified into a category as yet.
SAVE & ACCEPT